Here the long vowels of Afrikaans are described. See The Afrikaans Vowel System for an overview of the Afrikaans vowel system. With regards to the Dutch vowel system, refer to the topic on the nucleus in Dutch. Long vowels (and also diphthongs) occupy two structural positions (XX) in a rhyme, as shown in (i) (in an open syllable, as in see) and (ii) (in a closed syllable, as in een) (see Figure 1). See The Short Vowels for examples of syllable trees for short vowels.

In terms of distinctive features of segments, X depending on N is represented here by -cons, while X depending on C by +cons. Long vowels thus equals -cons-cons; the same applies to diphthongs. 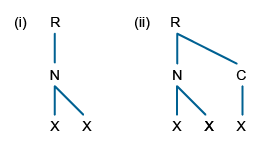 In the following examples of the four long vowels of Afrikaans ( /o/, /e/, /a/, /ø/) are presented, indicating position in syllables (in onset or in (onset + nucleus), as well as stress. a = closed syllables and b = open syllables (i. word-initially; ii. word-medially; iii. word-finally).

In this section special attention is given to the vowels /o/, /e/, /ø/ and /a/. The examples are restricted to simplex words. Many multimorphemic, derived cases exist.

As was stated elsewhere, /i/, /y/ and /u/ are not included here, as is the case with Dutch; (Le Roux and Pienaar 1927; De Villiers 1949; Coetzee 1982; Combrink and De Stadler 1987; Wissing 2014). Also keep in mind the motivation in The Short Vowels for acceptance of short /ɑ/ instead of long /a/ in open syllables, especially in word-final position. Central to this is the rejection of the notion of ambisyllabicity. Also see Aarts (1994)

Note that /a/ is the only long vowel considered as a true monophthong. As is the case in Dutch, the other three long vowels /e/, /o/, /ø/ are very generally, though not exclusively, realised as semi-diphthongs in the case of Afrikaans ( [iə], [uə] and [yə]), with off-glides in the region of schwa. In some non-standard varieties, such as those heard in the northern regions of Namakwaland, Northern Cape, it is more readily heard as monophthongs. Apart from the phonetic evidence, there is sufficient phonological reasons for accepting these three long vowels as underlying monophthongs. This is why we transcribe them as monophthongs, as is generally being done for the same vowels in the case of Dutch and Frisian. It could, however, be a possibility for these three vowels to, over time, develop into a separate set of primary phonemic diphthongs, viz. /iə/, /uə/, /yə/, replacing the standard set of long mid vowels /e/, /o/ and /ø/.

[+]Nature and frequency of occurrence of the long vowels

In contrast to the other positions, all of the long vowels lack frequency in open, word final position. This is in contrast to the frequent most common word-final open syllable occurrence of some of the short vowels, especially /ə/ and /ɑ/, but also /i/ and /u/, that both is considered to be long in the case of Dutch, and Afrikaans. This fact strongly serves as extra motivation for deeming /i/ and /u/ as being short.

Long vowels in unstressed position frequently reduce in either duration or vowel quality, or both. This is taken care of elaborately elsewhere, where these phonological processes are handled. Here are some examples: