Clitics are the weak forms of function words (such as pronouns, determiners, auxiliaries, particles, conjunctions, prepositions). Whereas the function and meaning of their weak form is identical to their full/ strong form, clitics are not autonomous words and phonologically resemble affixes. This entails that they are phonologically dependent on a host word to which they attach and with which they form a prosodic constituent. Moreover, they cannot carry main emphasis, accent or focus. What makes clitics special is the fact that they can attach to a wider range of word classes, which makes them (morphologically) different from regular affixes. Furthermore, the syntax of clitics can differ from the syntax of the corresponding strong/ full forms (see section about non-isomorphism below). Introductions to clitics and general discussions of the status of clitics can be found in Booij (1995), Wackernagel (1892), Zwicky (1977), Klavans (1982,1985), Spencer and Luís (2012) and Anderson (2005).

The examples in tables (1)-(4) show which word sorts can form clitics.

The full forms of the adverbial pronouns can be used in stressed and unstressed positions.

er is both the allomorph of het which is used in prepositional phrases, always occuring before the preposition and the adverbial pronoun for there. It has the full form /ɛr/ and the weak form /ər/. In contrast to the personal pronouns, the pronouns het and er, cannot be used in stressed positions but instead have to be substituted by their corresponding demonstrative pronoun forms dat /dɑt/ and daar [dar] (with its weak form /dər/ also functioning as a stylistic variant of er).

Since many of the weak forms listed above cannot be derived from their strong counterparts by simple phonological processes of reduction, they are presumed to be listed in the lexicon as such (indicated above by denoting both forms as phonologically stored). This is supported by the fact that in some idiomatic expressions only the weak form is possible:

Most clitics, except ie /i/ and ik /ɪk/, either have schwa as their only vowel or are totally vowelless. They do not form prosodic words of their own since these would require at least one full vowel. Since schwa never bears stress (cf. topics about the mid-central vowel /ə/ and schwa epenthesis) and it is the prosodic word that is the domain of word-stress rules, clitics cannot carry stress either.

It is debated whether clitics have to be treated as a special prosodic catergory. According to Nespor and Vogel (1986) and Hayes (1989) amongst others, the 'clitic group' occupies its own tier between the phonological phrase and the prosodic word (ω) in the prosodic hierarchy. Booij (1995;1996) argues against treating clitics as a separate group but rather for seeing it as a matter of prosodic integration into an adjacent prosodic word.

Another phonological process that applies to a host+clitic-combination after schwa is Prevocalic Schwa Deletion, which states that schwa is deleted if it occurs before another vowel:

Another possibility to resolve hiatus is /n/-insertion, as shown in (3a) and (3b) (cf. also the section about the non-isomorphism between syntactic and prosodic structure below).

Since the domain of this phonological process is the prosodic word, it does not take place between a clitic and a following word. Instead, like in unstressed prefixes, a glottal stop is inserted:

Another process that also applies to clitics in Dutch is Homorganic Glide Insertion. 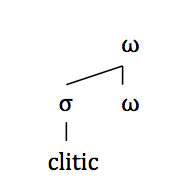 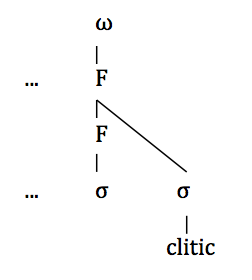 For more information concerning this structure and other possibilities of representing encliticization see Booij (1996: 12f.)

For more information about the representation in figure (1) and the discussion about F-level skipping and thus violating the Strict Layer Hypothesis see Booij (1996).

Thus, Dutch proclitics are adjoined to the following prosodic word while Dutch enclitics are incorporated into the preceding prosodic word. Prosodically, proclitics are identical to prefixes while enclitics are identical to suffixes, being supported by evidence from morphologization that diachronically proclitics change to prefixes and enclitics to suffixes (Hopper and Traugott 2003). That there is a difference between pro- and encliticization is also shown by the fact that phonological processes apply to a different degree within the two groups. While, as shown above, enclitics undergo processes such as prevocalic schwa deletion, homorganic glide insertion, /n/-insertion etc., these are not obligatory in proclitics. Here prevocalic schwa deletion only occurs in very casual speech

Clitics can thus function both as proclitics and enclitics in Dutch, except group 1 comprising ie he, its allomorph die and pronominal der her which require a host on its left.

Function words (group 3) do not have to cliticize at all since they can form prosodic words of their own.

The preference for encliticization in Dutch is due to the fact that the language provides left-headed feet (aka trochees), which makes the prosodic incorporation of an (unstressed) clitic easier at the right edge of a word. Consequently, since Dutch generally disprefers prosodic words beginning with a schwa like 't [ət] it(Booij 1995), schwa-initial clitics will preferably be encliticized and resyllabified obligatorily ((Jan) ziet 't ((zi)σ (tət)σ)ω (Jan) sees it).

While pronominal clitics (see table (1) above) can exhibit both directions of cliticization, example (8a) shows that consonantal, i.e. vowelless clitics, such as 'k I or 't it, preferably are subject to encliticization, as claimed by amongst others Booij (1995) and Gussenhoven (1985). That consonantal clitics are indeed left-headed, is indicated by their use in combination with words ending in a consonant where the clitic variant with schwa must be used: Ik pak 't [ɪk pɑk ət]/ [*ɪk pɑkt] I fetch it.

As the example above shows, these vowelless clitics can create consonant clusters which do not form well-formed onsets, like /kb-/'k ben I am or /tf-/'t valt it falls. All these co-occurence restrictions between a clitic and the preceding phonological material suggests that they indeed form a unit together.

The prosodic and syntactic structure of clitics is not isomorphic. An example of this fact is found in (10) where the determiner 't the syntactically belongs to the following noun boek book. Prosodically however, since this clitic needs a host, it gets incorporated into the preceding verb kocht bought, together with which it subsequently forms a prosodic word.

Evidence for incorporation is found in resyllabification where a blocking of other phonological processes such as optional /n/-deletion after schwa in (11) can be observed: