At first approximation, the total number of arguments that a verb takes, can be used as basis of classification.

The verbs that adhere to this basic classification scheme are grouped together as the nominative-accusative or unergative subsystem. They have subjects that typically perform the thematic role of agent, or by extension the force or instrument of the action of the verb. The unergative subsystem is shown visually by Figure 1.

Figure 1: The three argument structure types in the nominative-accusative or unergative subsystem 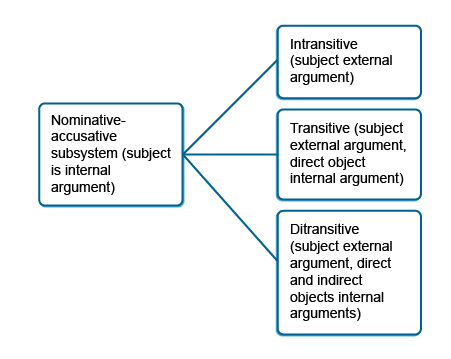 The three ergative types are visualised in Figure 2.

Figure 2: The three argument structure types in the ergative subsystem 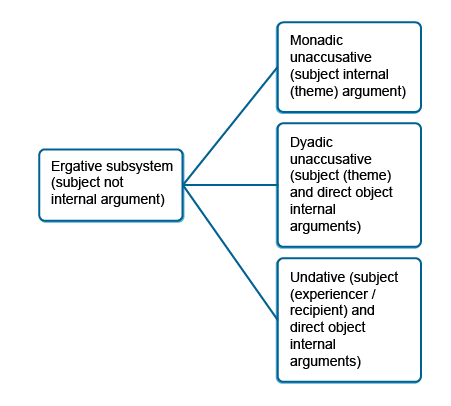 Apart from argument constructions with one or more nominal arguments, there is also a small class of impersonal verbs that take no referential argument noun phrase, but take a dummy subjectdit it in Afrikaans (see example (9)).

Unergative verbs have an external argument as subject, usually the agent of the verb, as illustrated by example (1) to (3).

This basic classification accounts for the vast majority of attested sentences in Afrikaans, which exhibit typical behaviour, such as the possibility of passivisation with transitives and ditransitives, or the dative alternation with ditransitives. These basic patterns are also usually agentive, such that the subject is the argument initiating the activity of the verb, and can be extended to a (inanimate) cause that is behind the action, as illustrated by (4).

The possibility of a class of undative verbs is described by the Syntax of Dutch(Broekhuis et al. 2015:213-227). The same possibility also applies to Afrikaans. Thus, the verb kry to get, as mirror image of gee to give, typically has the recipient in the syntactic role of subject, as illustrated by (7). Verbs of cognition, for instance ken to know in example (8), take an experiencer as subject, rather than an agent that actively performs an act in order to acquire knowledge. Undative verbs take the theme as their object, so they have two internal arguments and no external argument, which distinguishes them from transitive verbs.

Verbs that require no argument, typically verbs that denote weather conditions, are used with a dummy subject dit it in Afrikaans, as illustrated by (9).