All lexical morphemes must constitute well-formed prosodic words in Dutch, i.e. they must be composed of one or more well-formed syllables. Moreover, any lexical morpheme in Dutch must have at least one full vowel, i.e. a vowel other than schwa [ə], and must not begin with schwa [ə]. The full vowel is obligatory since schwa cannot carry main stress in lexical words. In contrast, function words may contain schwa as the only vowel, as for example in een /ən/ a. Therefore, they do not form independent prosodic words.

Prosodic structure and morphological structure are not necessarily in a 1-to-1 relationship (Booij 1995:49). Most so-called cohering suffixes fuse with the stem to which they are attachted, i.e. these suffixes do not form a syllabification domain of their own. To illustrate, the morphologically complex word handen /hɑndən/ hands consists of the morpheme hand /hɑnd/ [hɑnt] hand and the plural morpheme -en /ən/ plural suffix. The suffix attaches to the stem and together they form one syllabification domain. As a result, the final consonant /d/ of hand gets syllabified as the onset of the second syllable. Syllable-final devoicing fails to apply as the obstruent is not attached to a coda position. The mismatch of prosodic structure and morphological structure is illustrated in the following figure: 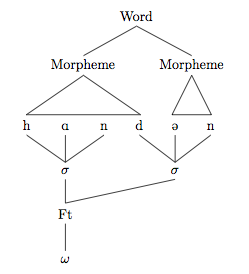 Evidence for their prosodic word status comes from the phonological process of Prevocalic schwa deletion: schwas are deleted before vowels to avoid hiatus as illustrated in zijden [[zijde]en] /zɛidə+ən/ [zɛidən] silken, which is derived from the noun zijde /zɛi.də/ silk. In contrast, in the adjective zijdeachtig [zijde][-achtig] /zɛidə-ɑxtəx/ [zɛidəɑxtəx] silky the final schwa of the stem is kept when combined with the non-cohering suffix.

In compounds, each constituent forms an independent prosodic word. This is illustrated in the example handappel [[hand][appel]] /hɑnd-ɑpəl/ [ˈhɑnt.ɑpəl] desert apple, a compound that consists of the two constituents hand /hɑnd/ hand and appel /ɑpəl/ apple - both of which get independently prosodified into prosodic words, which then form a recursive prosodic word (ω'). Since the prosodic word is the domain of syllibification, the syllable-final /d/ in hand surfaces as [t] as a result of (syllable-) final devoicing. 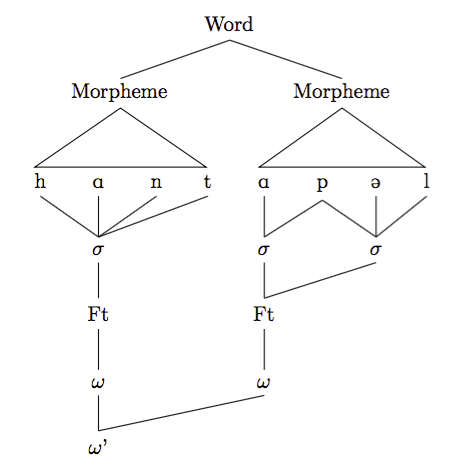 In contrast, complex words that are no longer semantically transparent may be prosodified as one unit. For example, the noun aardappel [aardappel] [ˈardapəl] potato is no longer understood as some sort of appel apple. According to Booij (1995), it has no morphologically complex structure and gets syllabified as a monomorphemic word. As a consequence, the final consonant of aard(e) earth is assigned to the onset position of the second syllable and fails to devoice. This is illustrated in the following figure: 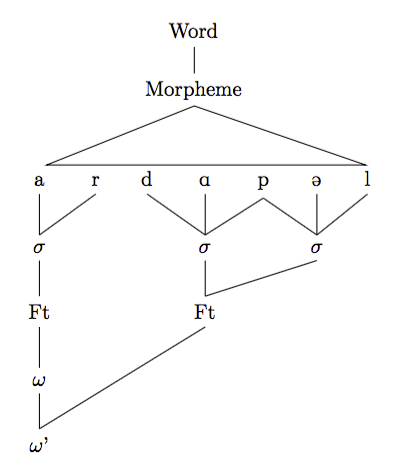 A final argument for a possible mismatch between prosodic and morphological structure comes from gapping, i.e. conjunction reduction in complex words. In complex words such as appel- en perenoogst [[[appel][oogst]] en [[[peer]en][oogst]]] apple and pear harvest or appel- of peervormig [[[appel][[vorm]ig]] of [[peer][[vorm]ig]]] apple or pearshaped, the identical parts oogst harvest or -vormig -shaped may be gapped since they form prosodic words of their own and are adjecent to the conjunction (see Booij (1995: 50-52) for more details on that matter). Non-cohering suffixes, which also form prosodic words on their own, allow for the same phenomenon as illustrated in the word appel- of peerachtig [[[appel]achtig] of [[peer]achtig]] apple or pearlike. In contrast, cohering suffixes cannot be omitted since they do not form prosodic words of their own - so rodig of groenig [[rood]ig] of [[groen]ig] reddish or greenish cannot be reduced to *rood- of groenig.

Rightward gapping is also possible in Dutch. In bio-appels en -peren [[[bio][[appel]s]] en [[bio][[peer]en]]] organic apples and pears the second occurrence of the (identical) part bio organic can be left out since it forms a prosodic word and is adjacent to the conjunction. In contrast, identical prefixes like in befietsen of belopen to cycle on or to walk on cannot be reduced to *befietsen of -lopen due to the fact that prefixes do not form prosodic words (Booij 1995: 51). However, exceptional cases like heranalyseren en -designen reanalyse and redesign instead of heranalyseren en herdesignen can sporadically be found.