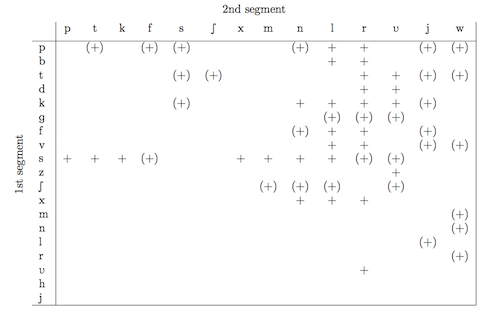 Disregarding the marginal clusters occurring in loanwords (see figure 2), it becomes apparent that onset consonant clusters of 'native' Dutch words usually consist of an obstruent followed by a sonorant (see right upper part of figure 2). The sonorant is usually either a liquid /r, l/ or the labio-dentalapproximant /ʋ/. Sequences violating the OCP (Obligatory Contour Principle) with respect to place of articulation are prohibited (see shaded cells in figure 2). The occurrence of the coronalnasal /n/ as the second part of an onset cluster is quite restricted; it only follows velars and, in only a tiny set of examples, the labio-dental fricative /f/. Two striking exceptions can be noticed. First, the labio-dental approximant /ʋ/ is the only sonorant that occurs frequently in the first position of a consonant cluster. It can only precede the rhotic consonant /r/. Second, the sibilant /s/ is the only obstruent that frequently co-occurs with other obstruents and that disobeys OCP restrictions. 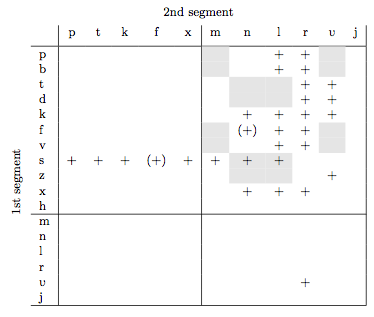 Table 1 presents examples of each possible CC-cluster that can be found in Dutch. Infrequent clusters that can only be found in loanwords are marked as such.

As can be seen in figures 1 and 2 and table 1 above, /h/ cannot form part of any cluster in Dutch, i.e. it only occurs as a singleton in syllable onsets. According to Booij (1995:36) this is due to the /h/-onset constraint, which says that "[a] branching onset may not dominate [+aspirated]".

The palatalglide /j/ can only occur as a singleton in syllable onsets or as the second member of a consonant cluster in Dutch.

In onset consonant clusters of two consonants the following combinations are theoretically possible:

As can be seen in figures 1 and 2 above, the first combination is strictly ruled out in Dutch as it does not comply with the generally preferred increase in sonority (or, equivalently, the gradual decrease of consonantal strength/complexity) in syllable onsets.

The second combination, sonorant + sonorant, is very restricted in Dutch. Apart from the sequence /ʋr/, all other sequences of this type are highly marginal and can only be found in loanwords. The sequence /ʋr/, however, is frequent and occurs in words like wrak /ʋrɑk/ wreck, wraak /ʋrak/ revenge, wroeten /ʋrutən/ to rummage or wringen /ʋrɪŋən/ to wring. Trommelen (1984:105) claims that in word-initial position this sequence is realized as [vr] with a voiced labio-dental fricative and therefore behaves in the same way as other word-initial obstruent + sonorant clusters.

The second type of obstruent + obstruent clusters, i.e. word-initial /s/ + obstruent clusters, occurs very frequently in Dutch. These clusters behave atypically for a number of reasons. First, as can be seen in the table above, it is only the segment /s/ that can cluster freely with all other (voiceless) obstruents (and almost all sonorants). Second, clusters such as /st-/, /sn-/ or /sl-/ in words like stom /stɔm/ dumb, stupid, sneu /snø/ pitiful or slim /slɪm/ smart illustrate that OCP restrictions regarding place of articulation can be violated by sC(C) - clusters. Third, in word-initial consonant clusters of three consonants the first position can exclusively be occupied by /s/ (see also Onset: sequences of more than two consonants). All of these facts point to a special status of the segment /s/ in any sC(C) - cluster. Phonotactic theories have accounted for the exceptional behaviour of /s/ by postulating a different syllable structure for this type of cluster. In doing so, the /s/ in sC(C) - clusters is allocated to a left appendix position (alternatively called extrametrical or (pre-)marginal position, with differences as to whether it is attached to the onset, syllable node or prosodic word node) or to a preceding syllable (depending on the syllable theory in use).

The fourth combination, obstruent + sonorant, is the most frequent type of consonant clusters in Dutch. Obstruent-sonorant-sequences obey the universal preference for an increase in sonority within onset clusters. However, some restrictions can be found nevertheless.

Concerning /Cn-/, /Cl-/ and /Cr-/ onset clusters, a tendency for voiceless obstruents to precede one of the three sonorants can be noticed. Since sonorants are inherently voiced, i.e. they are not explicitly specified with the feature [voice], it is possible to claim a general preference for voice agreement for such sequences.

Furthermore, OCP-effects can be found. First, clusters of two coronals like /*tl-/, /*dl-/ and /*zl-/ are not allowed due to a violation of the OCP with respect to coronal place of articulation. Notice that the sequences /sl-/ and /ʃl-/ are allowed, which gives additional evidence for proposing a different syllabic structure for /s/ʃ + C/ clusters (see also Onset: sequences of more than two consonants). Second, clusters such as /*pʋ-/, /*bʋ-/, /*fʋ-/ and /*vʋ-/ are prohibited as a result of an OCP violation caused by their shared labial place of articulation.

Moreover, the rhotic consonant can cluster relatively freely with obstruents in Dutch, which might be an indication that the rhotic consonant lacks a specification for place of articulation. The only obstruent-rhotic-consonant-sequences that are not allowed are word-initial sibilant-rhotic-consonant-sequences such as /*zr-/ and /*ʃr-/. The sequence /sr-/ occurs only in recent, highly marginal loans (see table 1 above). Trommelen (1984:110-111, citingZonneveld, ms.) claims that there is a filter/constraint active in Dutch that prohibits sibilant-rhotic-consonant-sequences. According to Trommelen, when such a sequence occured in the history of Dutch, the plosive /t/ intruded leading to (semantically related) oppositions such as

Table 2
The fact that Dutch does allow /sr-/ sequences in recent loans such as Sri Lanka /sri.lɑŋka/ Sri Lanka can be accounted for by postulating that the /s/ occupies the appendix or extrametrical position in analogy to /sl-/ onset clusters.

In the examples above we see that obstruent + glide consonant clusters such as /pj-/, /tj-/ or /kj-/ appear only marginally in word-initial syllable onsets. In contrast, in word-medial syllable onsets the very same clusters occur frequently in e.g. diminutives, in which the morpheme /-(t)jə/ is attached to the root and place assimilation applies. Consequently, these clusters can be found in words like boompje /bom.pjə/ tree-DIM small tree, treintje /trɛin.tjə/ train-DIM small train or koninkje /ko.nɪŋ.kjə/ king-DIM little king. These examples illustrate that there are differences in the restrictiveness of phonotactics on the syllable level and phonotactics at the word level.