In the following section, /d/ deletion, the most well-known process of consonant reduction in Afrikaans, will be discussed.

The phonological process /d/ deletion is a well-known and widely-occurring process in Afrikaans, characteristic especially of casual speech but far from being exclusive to this style. The faster a speaker speaks, the more probable the rule will be applied (the RAP will be relatively higher). As in most other cases, factors like the familiarity of the word in everyday speech and the frequency of usage are promoting factors. In connected speech, especially in unaccented sentence positions, this type of consonant reduction is typical. However, it is such a typical characteristic of Afrikaans that even in formal language it is present in abundance. Coetzee (1991) provides an excellent overview of the literature on this topic, as well as a list of rule application probability indexes, based on a corpus of spoken Afrikaans. Other references are: (Le Roux and Pienaar 1927; De Villiers and Ponelis 1992; Combrink and De Stadler 1987; Wissing 1982; Wissing and Van Dijkhorst 2006; Wissing 2017).

Of a number of consonant-reduction processes resulting in the restoration of the universally optimal CV syllable structure pattern, /d/ deletion seems to be one of the most common ones in Afrikaans. See Consonant cluster simplification for an overview. As in the case with some other processes of consonant reduction, /d/ deletion is found in a variety of contexts, within lexical items as well as across word boundaries in connected speech. Examples of the former are function words like ander other, plural forms such as hande hands and derived adjectives such as wilde wild (from wild); also in compound words, especially those with a high frequency usage, such as the names of week days. In Donderdag (see Figure 1 below) /dɔndərdɑx/ [dɔ:nərɑx] Thursday the second /d/ as well as the third /d/ and /y/ tend to be dropped quite frequently, even in more formal style, as is evident in the readings of news bulletins. Listen to the following example:

Figure 1: Oscillogram and spectrogram of Donderdag 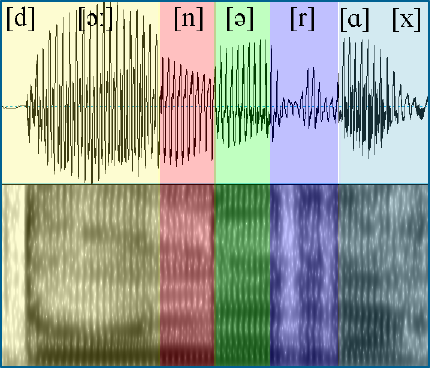 Examples in connected speech mainly involve the article die when preceded by mainly function words ending on a sonorant consonant e.g. in a phrase like van die for the.

In the following sections, cases of /d/ deletion like those above are provided and discussed in detail. As far as possible, examples have been extracted from the datasets mentioned in the Introduction to phonological processes, mostly from the RSG database.

[+]The deletion of the phoneme /d/ in monomorphemes

This type of consonant reduction takes place primarily in multisyllabic words where /d/ is preceded by a sonorant consonant and followed by a vowel, mainly schwa /ə/. A first approximation of the /d/ deletion rule can, therefore, be formalised loosely and in over-generalised form as Rule (1):

Note that Ø = zero; V' = an accented vowel; $ = syllable boundary; "..." indicates the presence or absence of other segments; _ indicates the position of /d/ in the form prior to deletion taking place.

As mentioned above, in reality this rule is an over-generalisation: "Vowel" in fact is limited to a subset of mainly non-high vowels and to practically no diphthongs.

In the following, examples and discussion of /d/ deletion will be largely restricted to cases where the sonorant consonant /n/ is involved; /r/ and /l/ will only occasionally be mentioned.

The role of frequency of usage seems clear when comparing the RAP results of the following three cases :

Coetzee (1990) mentions an overall average RAP 0.65 in the case of -der (as in 1 – 3 above), but while 1 and 2 are instances characterised by an extremely high RAP, even in formal speech, 3 is not. This illustrates the fact that phonetic content is not the only deciding factor determining the degree of rule application. All these words are well-known in Afrikaans, but ander and, to a lesser extent, sonder, are unlike handel, characterised by a very high frequency of usage. This fact is evident in other cases where /d/ gets deleted, to be discussed in the following sections. In the above three examples, as in many other cases, /d/ deletion results, via resyllabification, in the preferred syllable pattern (C)V$CV, from (C)VC$CV – see Introduction to phonological processes for more on this.

[+]The deletion of the phoneme /d/ in plural forms

The /d/ in plural forms ending on -e, which have a high frequency of usage, and in relation to which the underived form ends on /d/ – said /d/ is regularly deleted, rendering the same syllable pattern as in the case of monomorphemes, viz. (C)V$CV. Examples are han[d]+e hands and hon[d]+e dogs, again with retention of the preferred syllable pattern. Usually the vowel preceding /n/, /l/ and /r/ is short; words like aarde earth and woorde words, however, contain long vowels; in einde end it is a diphthong that precedes the sonorant consonant. In these three last words, /d/ is readily deleted in casual speech although seldom in formal style.

[+]The deletionof the phoneme /d/ in adjectival derivations

Similar to the preceding cases, /d/ is often deleted in derived adjectives in attributive position, e.g. ron[d]+e round and wil[d]+e wild wild.

A prototypical example of /d/ deletion in derived adjectives is the following: in the RSG news bulletin dataset (Introduction to phonological processes) none of the 33 occurrences of volgende next were read with retention of /d/. In casual speech, the same tendency is widely observable. The adverb gedurende during behaves similarly. On the other hand, a well-known and reasonably frequent word like bekende well-known is seldom heard without [d].

The lack of a high frequency of usage is, undoubtedly, the reason for the blocking of this rule in words like akkommoderende accommodating and innoverende innovating.

In is notable that /d/ does not undergo deletion in other phonetic contexts e.g. when /d/ is preceded by obstruents such as /f/ and /s/. Therefore adjectives like gekerfde carved or afgesponsde sponged down are not effected: *gekerfe, *afgesponse.

[+]The deletion of /d/ in ordinals

In casual speech, /d/ deletion takes place in ordinals ending on -de, in particular in derde third, vierde fourth, sewende seventh and negende ninth all words of a relatively high frequency of usage. In formal speech (e.g. in the RSG dataset) this is not the case.

[+]Deletion of /d/ in function words
The phoneme /d/ is used as onset of the function word die the and tends to be deleted in the same envionment as indicated above. This regularly happens in casual as well as formal connected speech. Less commonly, /d/ also undergoes deletion in dat that, in some cases even in complex words such as voordat before, even in omdat because, despite /m/ not being part of the primary set of sonorant consonants triggering /d/ deletion and as stipulated above.

Some prominent examples, found in the RSG dataset, of /d/-loss in die, are listed below. In order to give a picture of the extensive spread of this phenomenon in Afrikaans, some statistics are mentioned.

In total, 786 instances of the phrase in die in the were present. A subset of these – from only one reader – contains 21 cases. Of these, all but two in die phrases underwent deletion of /d/; die in both the exceptions was emphasised i.e. written as dié, denoting this rather than the. Other highly frequently used phrases of this kind include the following, all including a function word and all showing high RAP indexes:

The adverb dit it behaves in a similar way in connected speech to die, albeit in a much more restrictive manner; compare: en dit and it; kan dit can it; kon dit could it; sal dit shall it; wil dit will it; maar dit but it; verstaan dit understand it; voel dit feel it; hoor dit hear it.

The Afrikaans phoneme /d/ is frequently deleted in the function word die the when in combination with commonly used words which have an obstruent as coda. This happens predominantly in casual speech. A few representative examples are: