Regressive voice assimilation (RVA) is a well-known phonological process, extensively present in Afrikaans, much more than is the case in Dutch.

In Dutch, RVA is restricted to consonant clusters where the second obstruent is a voiced plosive. In such cases, the first obstruent of the cluster agrees in voicing with the voiced plosive. For extensive references, see RVA in Dutch. According to Le Roux and Pienaar (Le Roux, T.H.; Pienaar, P. de V. 1927), for Afrikaans a similar situation existed till at least the early decades of the previous century i.e. only stop consonants acted as triggers for RVA. Wissing, in a number of publications (e.g. in (Wissing, D. 1992), points out that since then this has changed dramatically - that is to say providing Le Roux and Pienaar's observation was correct. All voiced segments - fricatives, sonorant consonants, glides and even vowels to an extent, may cause RVA to take place. Moreover, RVA is present in different types of grammatical structures: compound words, derivations and in phrases, that is, both within words and across word boundaries.

As a point of departure (in Section A), RVA in Afrikaans compounds is described, taken from (Wissing, D. 1990) and, to an extent, from (Combrink, J.G.H.; De Stadler, L.G. 1987). Subsequently, in Section B, results are reported of an experiment (see (Wissing, D. 1992)) in which the occurrence of RVA in compounds, derivations and in phrases was investigated. A preliminary scale is provided of the relative strength of voicing influence that segments have on preceding voiceless consonants .

In the final section C, the results provided in Sections A and B are compared to those obtained from an investigation of the presence of RVA in the RSG spoken database, mentioned in the introduction to phonological processes; we focus on readings by one male presenter of RSG news bulletins; these are characterised by the clear presence of regressive voice assimilation.

[+] A. Overview of RVA in Afrikaans compounds

Examples of RVA where obstruents are involved are as follows. (4.4) below serves as a representative for all types of fricatives combined in C1 and C2 positions i.e./sv fv xv/. In later sections, more instances of RVA, i.a. with sonorant consonants as triggering segments in C2-position, are provided. Following this list of examples, two representative examples of oscillograms and spectrograms, as well as accompaning sounds are given, one of a fricative, and another of a stop consonant as C1 - see Figure 1. 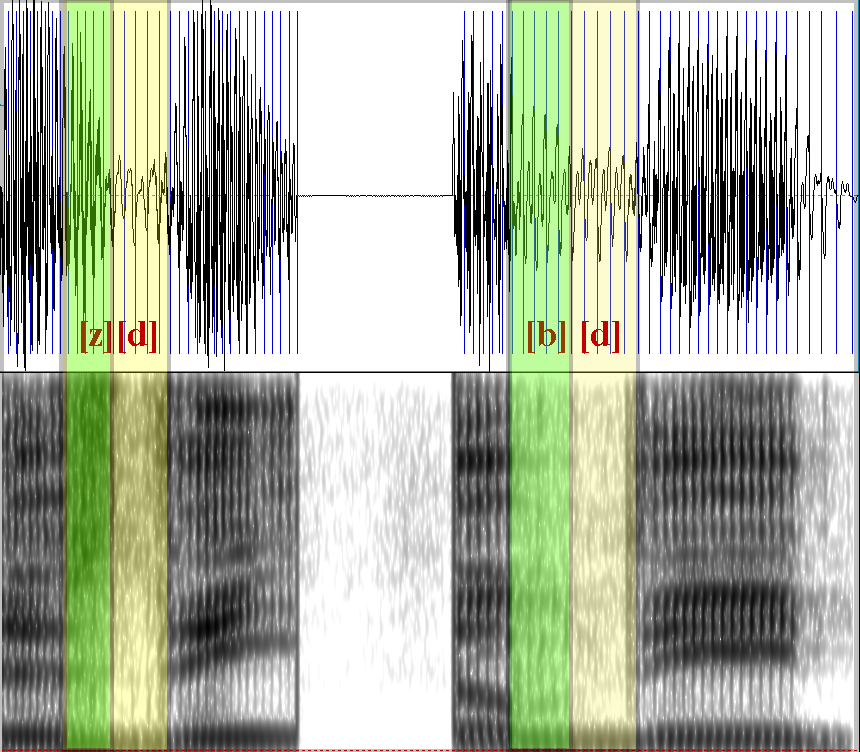 Listen to the following example:

In Figure 1 vertical blue lines indicate the glottal pulses of voiced segments, clearly showing the regressive assimilative influence of following voiced [d] on /s/ and /[p/], rendering [z] and [b] respectively in is die and op die.

Results regarding the productivity of the phonological process of RVA in Afrikaans compounds, derivations and phrases were provided in Wissing (Wissing, D. 1992). A summary of the findings follows. Based on the results, a scale of the relative strength of consonants with respect to RVA influence is proposed.

Compounds with the structure XC1#C2Y were read in carrier phrases by two Afrikaans speaking participants; it was known beforehand that their pronunciation was characterised by the presence of RVA. C1 could be either the plosive /k/ or the fricative /s/; the C2-position was occupied by segments representing plosives (/b d v/), fricatives (/v/), the sonorant consonants (/l/(lateral) and /n/ (nasal)), approximants (/j ɦ/) and vowels (/ɑ a/). These segments were also utilised in derivations and phrases (see below). Compounds of the following type were thus formed: C1 = /s/(plaasfarm + botterbutter), and C1 = /k/ (varkpig + bakkebowl) rendering the lists:

The results of this investigation show that RVA is present in all instances, though not to the same degree. Obstruents are much stronger in influencing preceeding segments' voice status, followed by sonorant consonants, approximants and to a very small degree also vowels. The RAP index for all the categories taken together (N = 651) is 0.44. Phrases with focus words inserted in the carrier sentence rendered a RAP of 0.64, while for phrases with surnames the RAP was 0.30. In comparison, compounds scored 0.23 while derivations scored 0.21. Clearly RVA is applied significantly more in phrases. Analysed per type of segment, obstruents are strongest (plosives 0.64; fricatives 0.62), followed by laterals (0.26) and nasals (0.24). The approximants scored a lowish 0.17, and vowels only 0.02. Based on these RAP indexes, a strength hierarchy was proposed by Wissing (1992).

This hierarchy is very much in line with the universally accepted Sonority Sequencing Principle proposed by Clements (Clements, G. N. 1990). Statistical differences lead to a threefold distinction between plosives, fricatives and the rest of the segments.

[+] RVA in the RSG dataset of spoken Afrikaans

On the basis of the results of the foregoing experiment, the exploitation of the RSG data-set was confined to the presence of RVA in normal words in sentence context (notably in phrases). Furthermore, in order to limit the extent of this section, the same segment clusters as above, as read by one RSG-presenter, were investigated. Therefore, the focus is on the obstruents viz. the voiceless and voiced plosives and fricatives.

This section constitutes an overview of the appearance of RVA in sentences in the RSG news bulletins as read by one RSG presenter, known to be a clear producer of RVA. The focus is on providing a representative sample in which obstruents are involved. Furthermore, for the purpose of comparison, the description is limited to the same clusters of consonants that are mentioned in (1) - (4) above, viz. /pd pb tb td kb sb fd xd sv/ 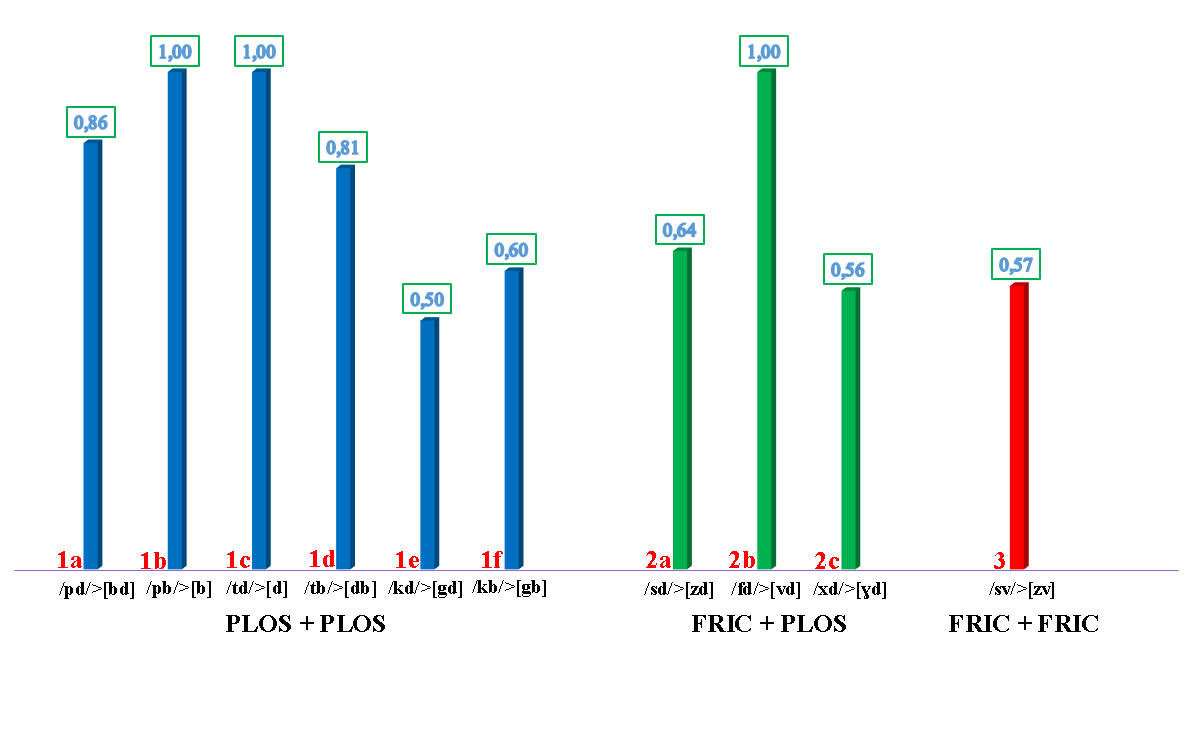 In the word lists below more examples are provided of the ten types of phrasal combinations of obstruents as provided in Figure 1.