Show full table of contents
The velar nasal /ŋ/
quickinfo
In this section, we will discuss the velarnasalconsonant /ŋ/ of Afrikaans. Its phonotactic behaviour is slightly different from that of the other two nasal consonants, /n/ and /m/.
Table 1
readmore
[+]Phonotactic behaviour

The velar nasal /ŋ/ does not occur in onsets of words, but, depending on the specific phonological framework that is adapted, it can, just as the other nasal consonants, /n/ and /m/, also occur in syllable onsets. It can occur in simple and complex codas, but not after long vowels of diphthongs. Examples are provided in (1) and (2).

Example 1
Coda
bang
Example 2
Intervocalically
The rejection of the notion of ambisyllabicity makes possible the acceptance of / ŋ/ as onset of a syllable, as proposed in (2). See for more.
[+]Acoustic information

The velar nasal [ŋ] has quite similar acoustic properties than the other two nasals, [n ] and [ng], as is evident in the spectrograms of the nonsense words mamamam, nananan and [ŋaŋaŋaŋ] in the figure below, where the nasal consonants are indicated within coloured blocks. The only difference is to be observed in the third velar nasal, where the third antiformant is more well-defined than those of the other two nasal consonants.

Figure 1: Spectrogram for the velar nasal /ŋ/ in nonsense words 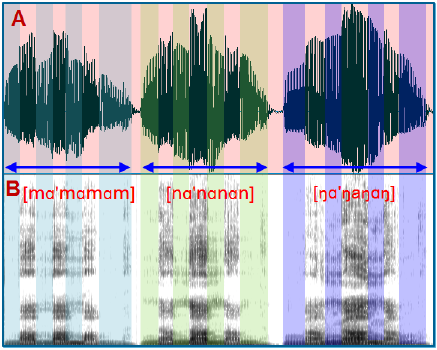 [click image to enlarge]
References:
⇑ Back to top
ABOUT THIS TOPIC
Author(s):
Daan Wissing
Category:
Afrikaans Phonology
Publication date:
14 May 2020
cite
print
report error
This is a beta version.
Jump to: